Article taken from The News Center. Click here to see the original article.

“The success of Hino in the U.S. has driven additional growth and success,” Hino Motors Ltd. President and CEO Yoshio Shimo said at the grand opening ceremony for the facility, where the company’s medium- and heavy-duty trucks have been in production since May.

Hino spent $60 million turning the 1 million square foot former Coldwater Creek distribution center into a state-of-the-art truck manufacturing facility. There are 470 people employed there, with the expectation that number will reach 550 next year.

When Shimo announced the new investment and a forecast workforce of 800, the audience of Hino employees, suppliers, dealers and state and local officials — including West Virginia Gov. Jim Justice, Sens. Joe Manchin and Shelley Moore Capito and U.S. Rep. David McKinley — responded with a standing ovation.

Glen Ellis, vice president of customer experience for Hino, said the new investment should begin next year, with the jobs starting to be added around July 2021. The additions will allow the cab assembly for all Hino trucks produced in the United States to be done at the local plant, which is within the city limits of Parkersburg despite being located off West Virginia 14 at Mineral Wells. 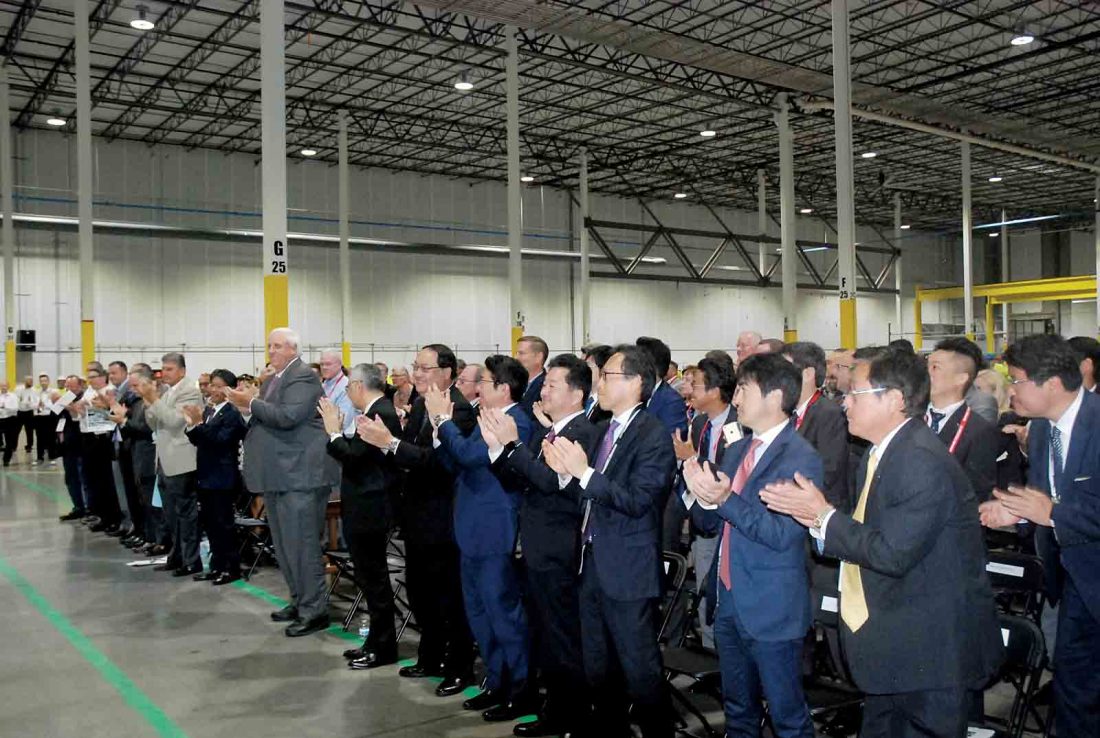 “What these people are doing … is phenomenal, to say the very least,” Justice said after the ceremony. “Once a company puts that level of footprint anywhere, they’re not going to leave. What they want to do is expand.”

Justice said the state needs to “accommodate, appreciate and perpetuate their growth.”

Both Hino leaders and government officials attributed that growth first and foremost to the local workforce.

“Hino could have located their plant in so many other locations,” McKinley said. “You made it easy for them to decide to stay here in West Virginia.”

Capito said the announcement of continued investment is good news on regional and individual levels. 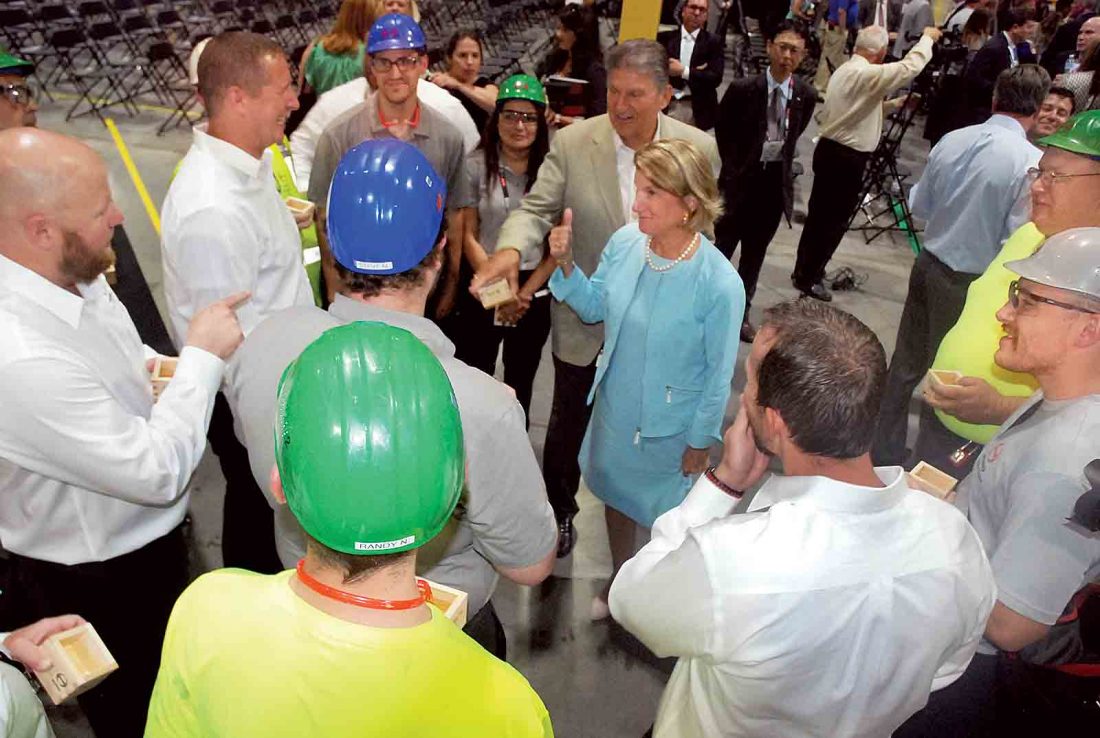 “That’s 250 families in this region, in Wood County, in Parkersburg and Vienna and Williamstown,” she said. “Thank you … for your faith and your confidence in us as West Virginians.”

“You are our greatest asset, and it is what you do every day that defines Hino,” Ono told the workers. “I am confident that we have the best team in the industry to overcome any obstacles.”

Manchin, D-W.Va., was governor when Hino opened in Williamstown in 2007.

“To see what it has grown into … is totally unbelievable,” he said before the ceremony. “And they’ve never looked back.” 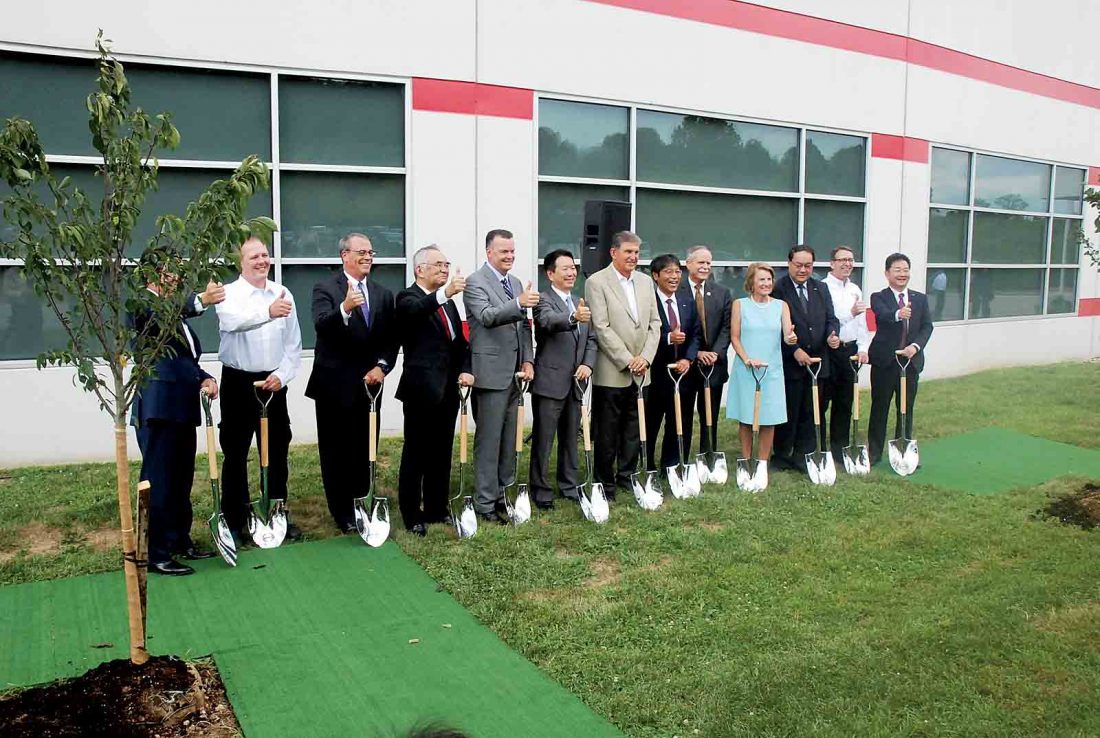 Hino officials and guests pose for a photo after a ceremonial Japanese cherry blossom planting outside the company’s West Virginia truck manufacturing plant in Parkersburg Wednesday. (Photo by Evan Bevins)

Ambassador Kanji Yamanouchi, with the Japanese Consulate General’s office in New York, called the new facility “a demonstration of friendship and trust between our two countries.”

Among those speaking was Mike Brannon, maintenance team leader, who has worked for Hino since August 2007. He spoke about the pride workers feel when they see Hino trucks on the road.

“Hino Motors is also very committed to the growth and development of its team members,” he said, noting he is one of 14 employees enrolled in a program, funded by Hino and supported by the state, to earn their associate’s degrees in advanced manufacturing from West Virginia University at Parkersburg. “The sky is the limit for this young company.”

The plant’s property was annexed into the city back when it was owned by the Wood County Economic Development Authority and leased to Coldwater Creek. Parkersburg Mayor Tom Joyce said Hino officials were complimentary of the efforts of city officials in helping to make the new plant a reality.

“Today I was both impressed and appreciative of all the efforts, including the state of West Virginia (and) Wood County development authority, and I’m extremely proud of our development office staff and public works and code officials,” he said. 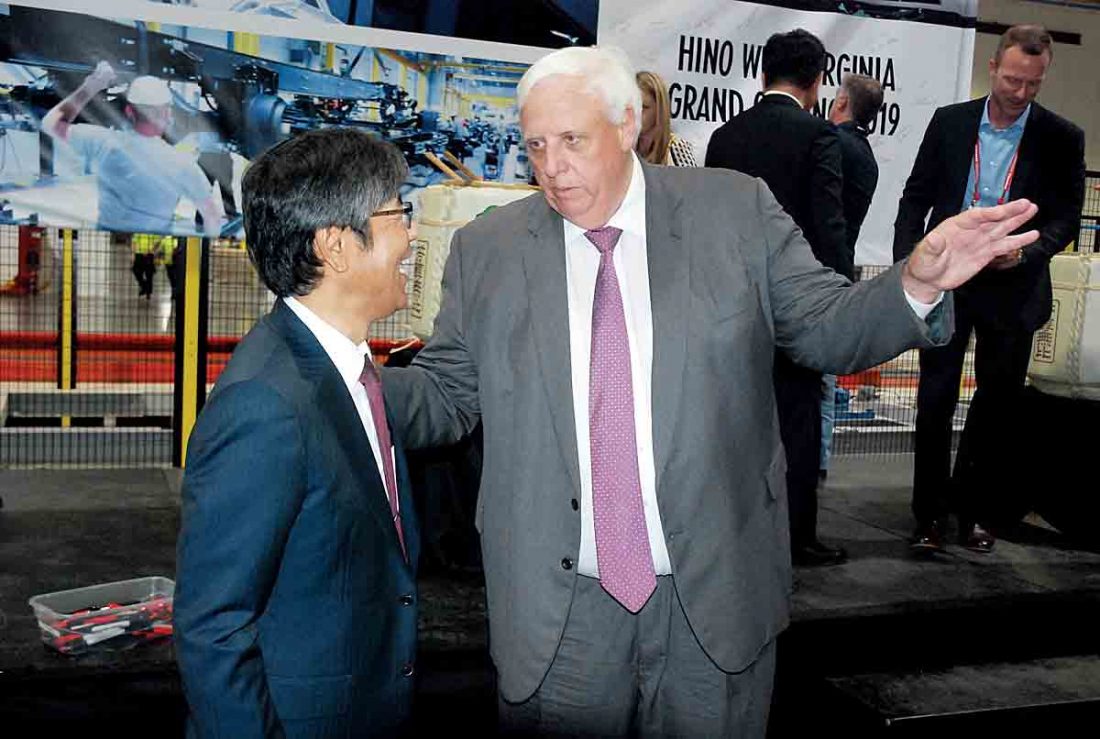 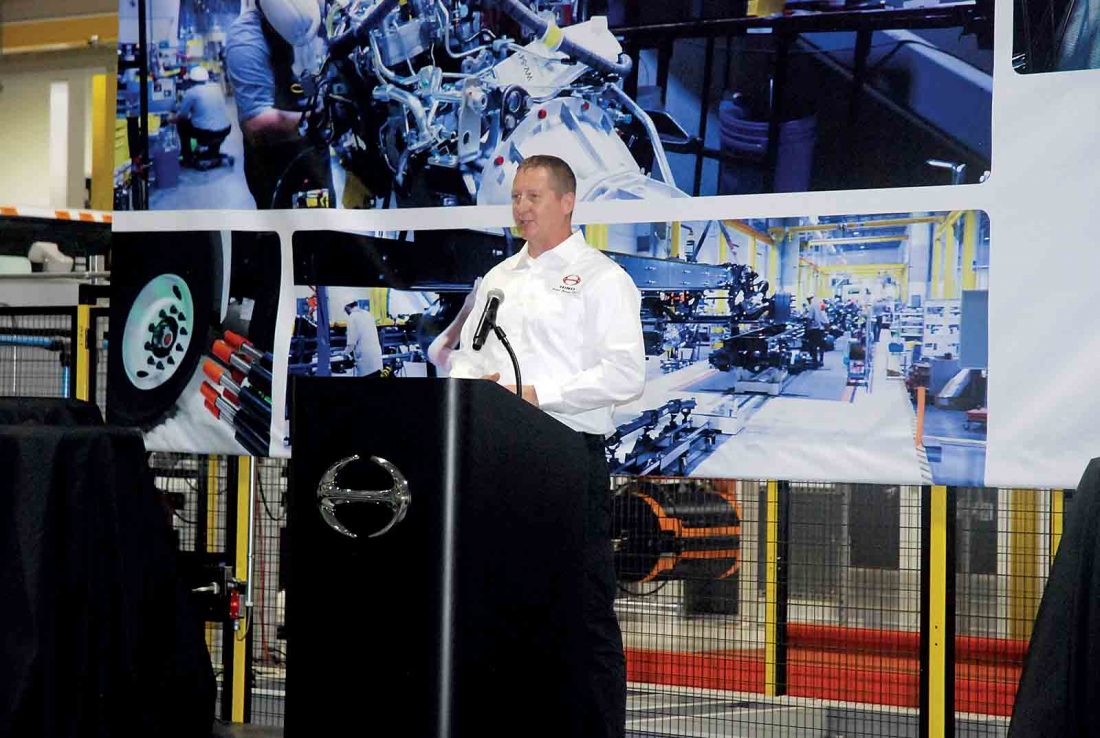 Among those speaking at Wednesday’s grand opening celebration for Hino Motors West Virginia truck manufacturing facility in Parkersburg was maintenance team leader Mike Brannon, who has worked for the company since 2007. (Photo by Evan Bevins) 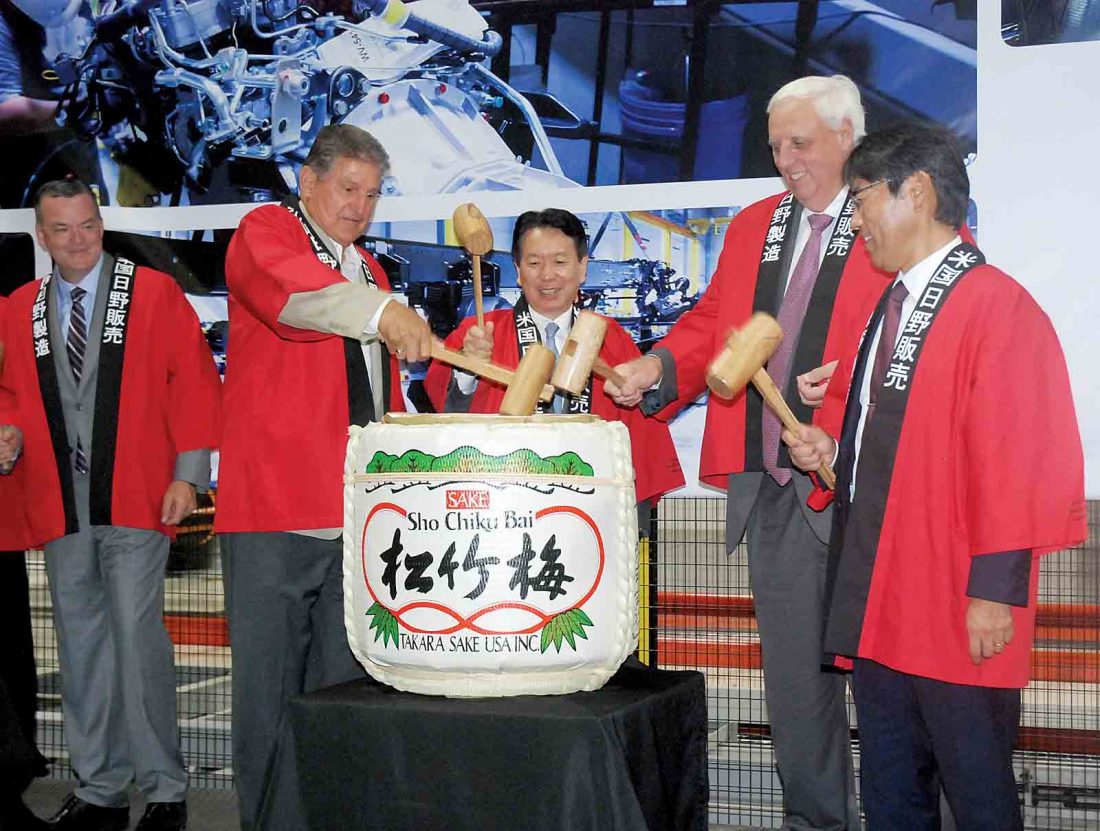 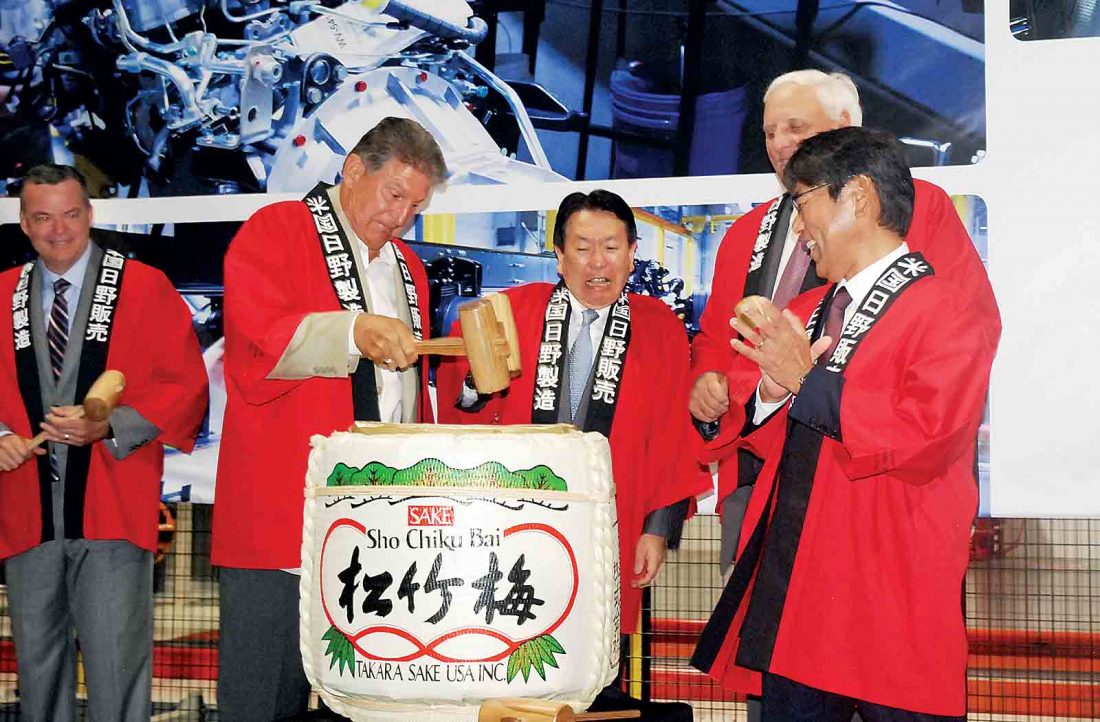 From left, U.S. Sen. Joe Manchin, D-W.Va., surprises Hino Motors Ltd. President/CEO Yoshio Shimo with a splash when he finally breaks through the wooden top of a barrel containing Gatorade during a kagami wari ceremony at the grand opening celebration for Hino’s truck manufacturing plant in Parkersburg Wednesday as Gov. Jim Justice and Hino Motors Manufacturing President Takashi Ono laugh. The ceremony symbolizes new beginnings and traditionally involves sake, but Gatorade was substituted since not all of the plant’s 470 employees are over the age of 21. (Photo by Evan Bevins)